How to Crate Train a Puppy

Puppies are cute and fun, but they can also be very destructive, use rugs and beds as toilets, and have little sense of self-preservation. If you used to think “well, locking your puppy up in a cage is cruel”, usually a hour after your pup comes home and you realize the pup has already soiled the carpet twice, eaten your favorite pair of shoes, and tried to commit suicide by swallowing an entire bottle of dad’s medication you start to come around to the idea of crate training. 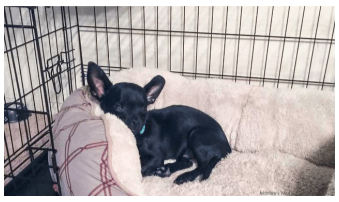 There are so many benefits of crate training. Here are a few of the most important ones I can think of: 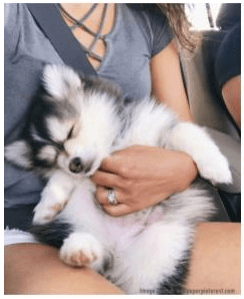 Sometimes you need somewhere to park your dog

While it is true that puppies can be successfully raised without the use of a crate, an adult dog who hasn’t been crate trained can be a bit of a problem. For example, a friend of mine never crate trained her dog, who is now a 90-pound adult, and when the plumber refused to enter the house unless the dog was safely confined, she was rather confused as to what to do.

Another situation dog owners not infrequently encounter is the dog injures itself in some way and the vet says “crate confinement for a week”. If you didn’t crate train, how are going to keep your adult dog from racing around the house and messing up its $3000 knee surgery?

What if you decide it would be really fun to try agility or dock-diving?

Crate-training is a prerequisite for dog sports. You can’t even attend a beginner dog sports class if your dog can’t calmly wait in a crate. You may not intend to try out some dog sports when you first get your puppy, but you might decide to try one at some point. If your pup is crate trained, you are ready for class. 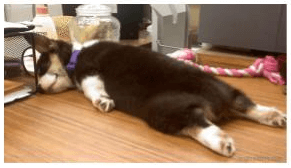 I suggest getting one of the metal wire crates that fold flat. And remember, size is important when house-breaking. You need a crate that is large enough for the puppy to stand up in, turn around in, and lie down in, but no larger. Some companies sell crates with dividers so you can buy a crate large enough for your puppy’s adult size (the APDT has helpfully prepared a chart of expected adult size crates by breed) and section it off to make it suitable for your puppy’s current size.

Where to put the crate

Do not put the crate in the center of activity in the house. Put it somewhere quiet and relaxing, but not totally isolated; the puppy wants to feel like part of the household, not like it’s been locked up in solitary. A good place is somewhere you like to spend time relaxing yourself.

The crate is for relaxing 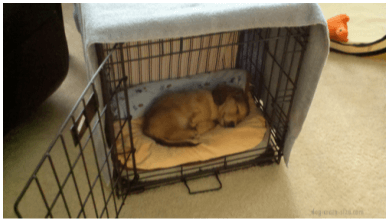 Particularly during the first two nights in a new home, practically all puppies will vocalize (whine, howl, whimper) when they are first placed in the crate for a nap or at bedtime. It is vitally important to stock up on earplugs during this period of time and ignore the pup. Never let a puppy out of a crate unless it is being quiet and calm. 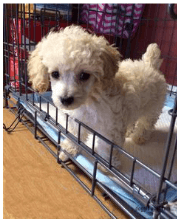 Don’t leave your puppy in the crate all day

If you try to leave your puppy in a crate for a prolonged period of time you will come back to a potty-soiled crate and a filthy, very upset puppy. Young puppies need to potty often. I suggest setting an alarm clock so you take the puppy outside at the appropriate interval around the clock. The Humane Society says your puppy’s age in months is the number of hours the puppy can go between potty breaks. Puppies who are forced to potty in crates can lose their “cleanliness” instinct and can then become practically impossible to housebreak. If you have to go to work, consider hiring a dog walker to take the pup out during the day. If you can’t manage that, try putting the crate with an open door inside an x-pen with a potty pad as far away from the crate as possible.

Running into the crate is fun

Waiting to exit the crate is fun

Here is a video showing how to train your dog to enjoy staying in the crate until released: Crate Games. This “waiting” behavior teaches the puppy self-control and can readily be carried over to teaching the puppy to not charge out of open doors just because they are open.

When the puppy isn’t in the crate, leave the door open. Most crate trained puppies will start going into the crate of their own accord whenever they want a peaceful nap.

I strongly recommend all puppy owners embark on crate training. It has so many advantages and provides the puppy with a set of ever-useful skills. Plus, crate training is not hard if you just take it one step at a time and always pretend it’s a fun game. Most puppies will be sleeping, eating, and relaxing in their crates within a few days. And once you have that crate training in place, potty and house training become a breeze, traveling in the car becomes easier, and the dog is prepared for any of a variety of situations in the future that require crating. 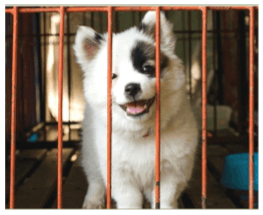 Dog of the Week

Dog of the Week